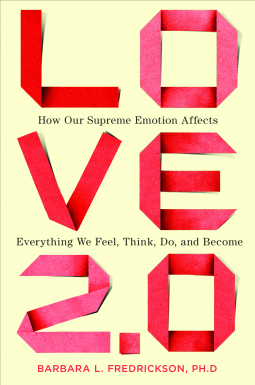 Since today is Valentine's Day, I thought you might enjoy some fun facts about love and positive psychology researcher, Barbara L. Fredrickson's new book,Love 2.0: How Our Supreme Emotion Affects Everything We Feel, Think, Do, and Become

, is loaded with never-before-heard-of facts about love, romance, health and success. So pull up a chair, grab a loved one and have fun!

Okay first, this is science, so we need to define our terms. But rest assured, these are fun terms!

Barbara is the researcher most associated with the Positivity Ratio (Quick: go measure yours here. Then come right back for more cool stuff.) Basically, the Positivity Ratio says if your positive thoughts and feelings (a.k.a. positivity) out number your negative thoughts and feelings (a.k.a. negativity) by a ratio of at least 3 to 1, you'll likely flourish, rather than languish. The upward limit is around 11 to 1. Poliannas don't flourish.

Why do folks with strong Positivity Ratios thrive? Because, according to Fredrickson's research, positivity broadens your perspective so you notice more opportunities (Funny,  Thomas Leonard said 15 years ago that's how Attraction works! I'd like to suggest that positivity is highly attractive). Positivity also helps you build resources such as, values, strengths and skills, that assist you even in tough times, which creates longer-term resiliency. That's her "Broaden and Build" theory.

Barbara has recently shifted her research to shared positivity, which she terms, "Positivity Resonance" or "Love 2.0". Love in the English language is an extremely broad term. To measure it, she had to define love very narrowly. Keep that in mind, while reading the fun facts about Love 2.0, below. Her definition for positivity resonance is limited to positivity that is shared by people face-to-face or in physical contact.

Well that's just 25 fun facts. I highly recommend you read the whole book, maybe with a loved one! Or just put some of these 25 facts to work in your life to enjoy greater health, resilience, flourishing, and love.
Want to learn more about Love 2.0 and other positive psychology tools? Take the Introduction to Positive Psychology for Coaches course. You can even earn a coaching certificate and get ICF CCEs:

7 Concerns About the New Board Certified Coach (BCC) Credential

Yesterday, I received a letter in the mail congratulating me on my new BCC (Board Certified Coach) credential from CCE (Center for Credentialing and Education).

It was nice to get, but no surprise.

CCE, a non-profit which has been certifying a variety of counselors for years, recently stepped into the realm of business, executive and life coach certification, with this impressive-sounding new credential. But any executive, business or life coach who was previously certified by the ICF or IAC and who could demonstrate that they already have coach-specific training, got grandfathered into the BCC for $100. The only catch was that we had to take a norming exam to help CCE establish appropriate exam questions for future coaches who test for the BCC.

Even though I have reservations about the new BCC life coach certification, I decided to take the plunge and get it for the following reasons:

That said, I have plenty of reservations about the new Board Certified Coach credential and may not use 'BCC' after my name in most situations - at least not yet. Here's why:

What do you think? Share your comments and concerns about the new Board Certified Coach credential in the comments area below.