6 Reasons to Run Screaming From a Coach Training School

Coaching schools are businesses and sometimes over-state what you, the coaching student will experience, if you join them.

And although most coaching schools are honorable, there is probably no school that can give you everything you want exactly how and when you want it.

Coaching is all about personal responsibility, so if you look at getting what you want as your responsibility (Or at least your shared responsibility), you can always find ways to work with a good coaching school that will leave you saying, I'm so glad I started my coaching career by attending XYZ Coaching School.

That said, there are some big red flags to watch for when choosing the school where you get your coach training and it's your responsibility to check them out. Here are a few:

Don’t think for a minute that you can learn everything you need to succeed as a coach in one weekend or in a few hours or days, or even two weeks, no matter how intensive the program. Shy away from promises like these. Short training programs rely on 'systems', 'formulas' or 'templates' that only work in very limited circumstances and are useless in the real world of coaching. Most comprehensive coach training programs take about 2 years to complete. However, you can start attracting paying clients even before you graduate or get certified.

Think twice about a coaching school that paints a too-good-to-be-true picture of what your coaching business will be like in the first few months. If you want to work part time, make hundreds of dollars per hour, take several weeks of vacation per year, only work when you want to and still make hundreds of thousands of dollars each year, this is indeed possible, but you must work up to it and it doesn’t happen for every coach. Expect to develop your ideal coaching business over time and commit yourself to actively creating it. The best school for you will assist you in succeeding with comprehensive tools that meet your needs.

Money-back guarantees sound great, but they can be a bad deal for the coach/student, because they give a false impression that you have nothing to lose. The wrong school for you will get in the way of your success and can cost you far more than the price of tuition. Most reputable schools will expect a strong commitment from you to your own success, which you demonstrate with your willingness to invest in yourself. Because nobody really wants their money back from their coaching school. What they want is a successful coaching business, as quickly as possible. Look for a school that will give you a “value back” promise, which simply states that they will do everything they can to assist your success, as long as you are committed and trying your best.

Run away fast from any coaching school that promises you'll make a six figure income in a year or less. What you earn as a coach is ultimately up to you, so any school that offers a dollar amount it pulling that number out of thin air.

Watch out for the coaching school that feels overly “slick” or commercial. Some of them are. Look for a commitment to quality and a willingness to give you what you need, not a prefab learning structure that forces you into a model or mold that may not fit for you.

Run like crazy from "Black Hat" coaching schools. These "fly by night" companies may have internet addresses that look and sound like reputable coach training schools or professional coach certifying organizations. In some cases, they may use "black hat" practices, such as buying links or email lists (SPAM) to promote their companies quickly. Google often identifies and shuts down black hatters on the internet in a matter of months, so a "red flag" that you're dealing with a "black hat" is that their URL (online address) is less than a year old and/or it's set to expire in a year or less.

The internet empowers those who use it.

Look up the URL of your school at a domain registrar, like GoDaddy.com and check the "Who Is" info for it, to find out how long the domain is registered. You can investigate further by Googling the name of the contact person in the registration. Look for evidence that they have been in the coaching business at least for several years. Note whether they are mentioned in lawsuits on the internet.

Use the "search" functions at Twitter, Facebook and LinkedIn and look for the profiles of the school, the owner, or the contact person associated with the domain registration. Also look for current and former students on social networking sites, such as these, and find out if they are happy with their schools. Even a few minutes' investigation can be very enlightening.

Last but not least, check the school's own site for evidence that the owners and instructors are qualified to teach professional coaching skills. Just because they have experience teaching something else, doesn't mean they know how to teach you to be a successful professional business or life coach.

There are plenty of good coach-training schools, so you can avoid the both the red flags and the black hats. If you'd like more informations, plus a table that compares several of the better schools... 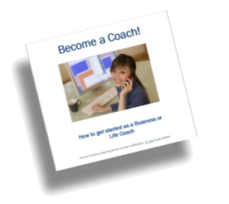 Want free information on coaching every week? Subscribe by email to the Coaching Blog in the upper right corner. Or click the orange RSS button.

Every week, I talk to people who want to choose the right coaching school for them...

And of course, money is always an important concern. Recently, the topic of money-back guarantees came up in a couple of conversations.

A few coaching schools offer money-back guarantees and they're a bad deal for several reasons.

For starters, they give new coaches the illusion that they have nothing to lose and boy, is that not true!

Reason 1: The Opportunity Cost is Far Higher Than the Tuition

Months ago, a coach contacted me who was attending a coaching school that I used to teach for, which offered a money-back guarantee when he joined in 2003. After years of taking zillions of classes, he still doesn't  have a coaching business.  Now he realizes he's in the wrong coaching school, wants his money back and thinks SCM may be the answer. He'd been contacting the other school for months to get his money and so far, has just gotten a run around. He told me he'd join SCM as soon as he has his money back. He's still waiting.

Result? Most coaches can put together a professional coaching business within a year or less, with the right support (Yes, even in this economy). And a moderately successful coaching business can easily earn $50,000 per year. (Some coaches earn six figures, some coaches, a lot less.) So if this coach had been coaching full-time since 2004, making $50,000 per year for five years, he'd have made $250,000 by now.

Not only that, he'd be spending his days doing what he loves instead of putting in thousands of hours at a job he can't stand.

So for a "no-risk" investment of a few thousand dollars, he's cost himself hundreds of thousands and years of his life.

Reason 2: No Risk No Reward

As I said, I used to teach at the afore-mentioned school. With low tuition and a money-back guarantee, it grew quickly. There were some highly-talented coaching students there - and there were a bunch who probably should never have gone into coaching. With a low entry barrier, many people who had heard you could make big bucks as a coach had joined. Still others had lost their jobs in the last recession and joined that school because they wanted out of the rat race and thought they had nothing to lose. If we make starting a coaching business sound too easy and coach training, no-risk, people join without being sure they really want to become coaches.

Reason 3: The School May Not (Be Able to) Return Your Money

The man who started that school was good for it and he was extraordinarily talented and completely sincere. However, he passed away suddenly of a heart attack, leaving the school to one of his colleagues.  By the time the estate lawyers were finished with it, the school's resources were depleted. And many of the students were unhappy with the change of command. They wanted their money back.

Result? Student requests for refunds went unanswered for months. Some gave up; some took legal action. No fun for anyone.

Reason 4: You Don't Really Want Your Money Back

Nobody joins a coaching school hoping it won't work out and then they'll have to ask for their money back. What they want is to become a successful coach. If you sincerely want to become a successful coach, look for something better than a money-back guarantee. Look for a school whose students are succeeding. Not just an exceptional few, but the vast majority. That school will require you to put your "butt on the line" as my coach would say. They won't accept just anybody with a credit card. They'll check you out, to make sure you're serious about coaching, even while you're checking them. And they will guarantee value: Effective class material, the best instructors, a proven path to success.

Result? You get what you really want: A successful career as a coach.

Reason 5: Getting what you pay for is way better than getting your money back.

You want to get it right the first time, don't you? So, look for a school that guarantees the value you really want. That's a Value-Back Guarantee.

You've probably guessed that SCM doesn't offer a money-back guarantee. But we do have a Value-Back Guarantee. What does that mean? If you put your own butt on the line by taking advantage of all the resources we provide and do your best to follow our instructions - and it doesn't  work out for you (Ex: You don't pass certification or you can't find clients) we won't offer you a refund, we'll bust OUR butts to give you what's missing (like, individual attention, new course material), because our job's not done until until you have everything you need to be successful.

Our coaching students are building successful businesses. And not after years and years of stuggling. They're building coaching success in their very first year - even in this recession!