How to Coach Masterfully: Google's Top Coach Tells You How

I found this great video on how to coach masterfully at the Institute of Coaching's website.

In this 30-minute interview with Google's Director of Executive Coaching & Leadership, David Peterson, PhD., discusses what it means to be a masterful coach, how it is nonlinear, goes way beyond asking powerful questions, and how nearly everyone at Google is shifting to a coach approach, so those who call themselves, professional coaches, need to get really good at what they do to stay credible.Hence, the discussion on coaching mastery.

Peterson also says that as the world moves exponentially faster, it's more critical than ever to be able to establish rapport quickly with clients, facilitate change rapidly and show results. A few years back, we posted a short video with then Google CEO, Eric Schmidt, in which he says, "Get a coach," was the best advice he ever received and how he believes everyone needs a coach. Apparently Peterson and his team really are getting those great results! Watch for more insights:

If you're thinking about becoming a masterful coach, consider studying positive psychology coaching, because evidence-based coaching is often preferred by large employers such as Google. And positive psychology is a natural fit for coaching. There are only a handful of positive psychology coaches who can claim to have reached mastery, so you will be able to distinguish yourself from the thousands of others who call themselves coaches. And there is still time for you to become one of the first to be certified by the International Association of Positive Psychology Coaches.

Get Master Coach Training in positive psychology coaching. Check it out below:

Everyone raves about coaching, but it's too expensive, right? Wrong!

Find out how to try it for free. And if you continue, it's only $19 - $39 per month to experience the transformitive effects of working with your own coach. Watch this preview video to get started. Visit www.LifeCoachCompass.com to learn more.

[UPDATE: Unfortunately, in June 2012, MyLifeCompass.com announced it would no longer be a multi-level marketing company for life coaching. It was unclear where the company wold head next. Read more about why I quit Compass Coaching.] 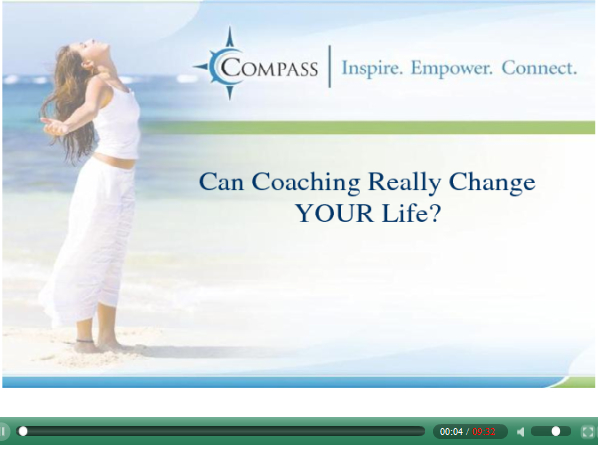 No wonder coaching is still one of the top growth careers even in 2009. No one would deny that Google's a successful company. If Eric Schmidt, Google's CEO, says everyone needs a coach, what might you accomplish with your own coach?

Get useful coaching info every week for free! Subscribe by email to the Coaching Blog in the upper right corner of this page. Or click the orange RSS button.