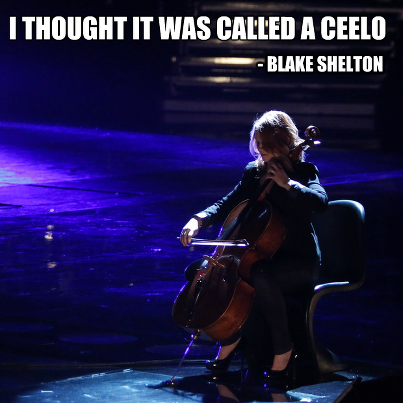 Like millions of others, I've grown to love NBC's The Voice. For me, it stands head and shoulders above other TV talent shows for a whole slew of reasons.

I even like it better than So You Think You Can Dance and I'm a former dancer! After laboring for years in dirty loft studios and off-off-off-Broadway theaters in Lower Manhattan, I can only imagine how incredibly cool it is for those young dancers to be featured on television. But it's equally cool for singers to get their chance on The Voice and the format of The Voice makes it really special.

What's so great about The Voice?

1. Like Ceelo Green says, The Voice is full of positive energy. Unlike some other shows that will remain nameless, all The Voice contestents are good performers. None of them are up there to be ridiculed and laughed at. It takes guts to go for your dream and the show respects that.

2. The Voice is a supportive environment. It's a cosmic kitchen serving up great singing chops. The first cool feature is that the judges are competing along with the singers, so they are on the line, too. That makes each of them, great singers in their own right, both judges and coaches. The Blind Auditions that made the show famous, mean the judges have to choose their team members on voice, alone. When more than one judege turns their chair around, the singer gets to choose their own coach, giving the power to the contestents. Those constant shifts in power make the show exciting. Plus, every coach has a vested interest in each of their singers. The better the singers do, the better chance the coach has to win. It's a win-win-win set up, much like a strategic habitat designed by a great life coach.

3. High-quality performances every week. With great coaching, huge talent, intense competition and tons of singing challenges and opportunities to perform, the singers grow before your eyes. Each week, at least one performance gives me chills. Last night, both Amanda Brown with 'Natural Woman' and Trevin Hunte with 'And I'm Telling You', gave me chills, tears in the eyes and a lump in my throat. As every coach will tell you, there's nothing better than witnessing someone who is stepping into their full potential. Very cool.

4. Acknowledgments from all the coaches. The show spends A LOT of time on this. It almost seems like too much, but it's a cornerstone of why the show works. Even though the coach/judges are competing, they are generous with both their praise and suggestions for improvement to all the singers. They don't just hand out pats on the head. And it's fun when they admit how jealous their are of the other judges' teams.

The possible exception is Christina Aguilara, who has doled out faint praise for several singers from competing teams. Positive psychology coaches will notice Christina's use of Passive Destructive Response (PDR) when critiquing Melanie Martinez on three separate occasions, by changing the subject and praising the stage set instead of the singing. It's a well-researched method for subtly stealing someone's thunder. As a result, I grew to dislike Christina and her team by extension and wonder if that's partly why the public voted them out early. I hear Christina won't be back next year.

5. The show is just plain fun. This year, during the knockout rounds, when singers had to win by singing a great duet with their opponent (another example of winning via cooperation instead of straight competition), competing coaches got to 'steal' the losers. Amanda Brown was snatched up by Team Adam Levine and Ceelo is still lamenting her loss.

Of course the banter between the judges is priceless, including Blake Shelton's dumb country jokes, like his comment last night that he thought that big violin-thing was called a Ceelo.

The Voice has everything that I love as a life coach: positive energy, supportive environments, great performances, acknowledgment and fun. As Oprah proved years ago, TV can reach for the highest common denominator and still succeed - hugely.

Curious about becoming a life coach?