Dear Coach: What if the Law of Attraction DOESN'T Work? 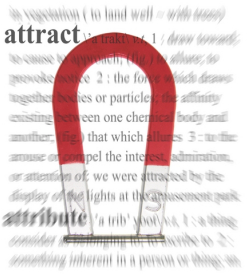 I don't want to ruffle your feathers, but if you teach the Law of Attraction, don't you ever doubt whether it really works?

I'm not against the Law of Attraction. It's a great way to draw people's attention to the subtle ways that events seem to line for us when we are sure of what we want. Most importantly, it offers a good excuse for practicing faith.

For example: Recently a relative of mine told me she had a job offer that she really wanted to take, but it was a 9-month teaching position that paid about 1/4 less than her current job. I said, "If you really want it, there's probably a way that you can do it. So the question to ask is not, 'Should I do it?', but 'How could I do it?'". She knew there were lots of part-time temporary positions for her skill set, so she took the job on faith and within a month, her new employer offered her a summer teaching position that made up the lost pay. You could say she attracted the outcome she wanted. You could also say she realistically assessed the situation. Both explanations accurately describe her outcome.

My problem with the Law of Attraction is that tends to confuse people. And no matter how you explain it, confusion stops people from getting what they want. Most people who grew up in the 20th Century (I bet that includes you) were taught that hard work, strategy, education, research, expert advice and goal setting would help them get what they want. Then they hear that the Law of Attraction says all they have to do is think about what they want and they will get it. Does that mean they can throw out hard work, strategy, education, research, expert advice and goal setting? No. All those things include thinking about what it is you want, so keep doing them if they work for you.

Another example: Several months ago, I was musing that perhaps it was time to find a new coach. I'm fortunate to have some of the best coaches in the world as friends who will coach me, as needed, so quality of coaching wasn't an issue, but I fantasized that perhaps it was time for someone who was a spiritual teacher, whose training was different from mine (so they could surprise me now and then) and maybe someone who owns a coaching school, so they could relate to some of the challenges I'm working with; all of that would be nice. A week or two later, Lama Tantrapa called me up out of the blue and suggested we start coaching each other. When stuff like that happens, I've learned to just say, "Yes."

Sometimes things seem to happen like magic, but that doesn't mean that all we ever have to do is set our intentions. As Lama says, "The road to hell is paved with intentions." It turns out he found me via LinkedIn. Was it the Law of Attraction or a good social media strategy that brought him to me? Yes.

I belong to the local Science of Mind church. It's pretty much ground zero for the Law of Attraction. But even they say that LOA doesn't work for everybody. Children who grow up in the church seem to create more of what they want just by thinking about it, perhaps because they don't have competing beliefs that confuse them.

Third example: The other day, I ran into the pastor of my church at the Post Office. She told me how she broke her toe by slipping in the bathroom. She said she had broken another toe on the same foot so many time that it was crooked and she had been considering having it broken by a doctor to straighten it back out. In other words, she had been thinking about breaking a toe and she then broke one. Be careful what you think about! Was it LOA or a freak accident? Whatever story you tell about it, she still has a broken toe.

Choose the stories that work for you. And let coaching clients do the same. Confusing them with the Law of Attraction may stop them from getting what they want, even if it works for you.

I'm here to say that the Law of Attraction is nothing but faith.

Or maybe it's just correlated with faith. But faith is huge. And at the opposite end of the scale is doubt. All healthy humans have both.

Imagine faith and doubt connected by a line. Faith pulls us forward and doubt pulls us back. However, there is often hidden wisdom underneath doubt, so explore it, rather than try to eliminate it.

Confusion on the other hand, erases the line. Doubt carries wisdom and connects to faith. Confusion is full of missed connections and blurred vision, kind of like the words in the image, above.

Whether you have faith in science, Jesus Christ, hard work, the Law of Attraction or all of the above, that faith will help to pull you forward. Uncover what's behind your doubts and erase your confusion if you can (by creating clarity) and you'll be pulled forward with less effort. It's not a guarantee of outcome, but rather something that correlates with success.

"No one should spend their time trying to think positive thoughts. We've all got better things to do." - Thomas Leonard

Some of the most successful and honest thought leaders out there, like Bill Harris, who appeared in The Secret, and Thomas Leonard, who 'founded' the coaching profession, don't ascribe to the Law of Attraction. Thomas actually developed a very different approach to attracting what you want called, The Principles of Attraction. Coaching is about getting what you want and there are many ways to do it.

Here's a secret: In my experience the Principles of Attraction, combined with the Law of Attraction is even more attractive. Consider trying both together.

What are your thoughts on Attraction? Feel free to share them in the comments section, below.

Want to learn about the Principles of Attraction for free?