How to Get Coaching from the Universe in Three Steps 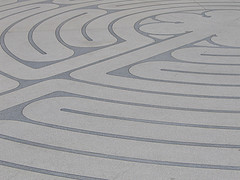 Each year, on Good Friday, The Center for Spiritual Living in St. Louis, spreads a huge canvas with a labyrinth printed on it (See photo at right, by Aperte at Flickr Commons) on the floor of their hall.

My intention was that my then, one-year old coaching school, would introduce coaching skills to at least 100 people within the year. That might not sound like a big goal, but we are not one of those giant coaching schools. In fact, I was still our only coaching instructor, at that time (now we have two more).

My question in that sacred space way, 'How could I introduce coaching to 100 more people this year?' The answer came immediately: Offer our new coach training course for free. No problem; I was ready to do it.

Then a more nuanced instruction came: "Why not ask each participant to make a contribution to a good charity?" I could immediately see the added value. "Free" is ubiquitous on the internet, but as attractive as free stuff is, the added fulfillment of giving was both unique and a huge upgrade.

As a result of that inspiration, I've offered our signature coaching skills course, Coaching Groundwork three times, each for the different charity including,  The Campaign for Tibet, The Hunger Site, and Habitat for Humanity. I've also tithed back to the Center for Spiritual Living.

This year, I set a much larger and more detailed intention: 250 new students, 100 Certified Mastery Coaches, more instructors and a rather large amount of money earned by the school.

As I drove away from the Center today, it occurred to me that I more than reached last year's goal, despite the economy. It didn't always show up the way I thought it should or when I thought it should, but it absolutely manifested. I'm equally certain that my intentions for this year are already coming true.

The Universe is a wonderful coach. To find a labyrinth in your community, do an online search for New Thought Churches, such as Science of Mind and Unity.