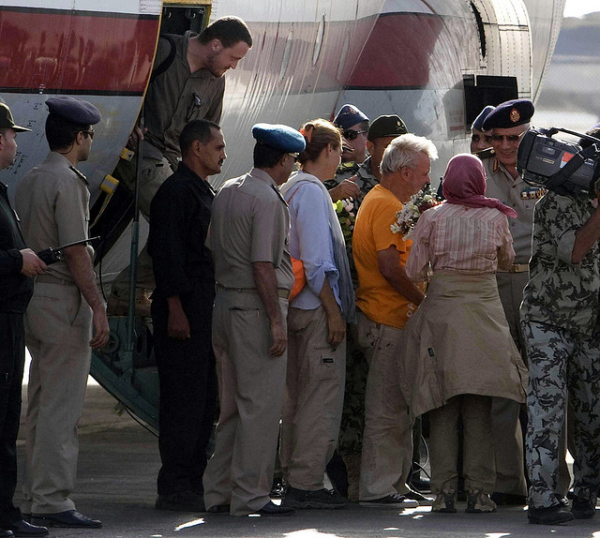 Hostages being freed, Egypt, 2008. Photo by Mohammed Ghafari, Flickr, Creative Commons.
Post by Julia Stewart, MCC
Life coaching is confused with a number of other professions. Hostage negotiation isn't one of them. So it might shock you to know that effective hostage negotiation shares quite a lot with effective life coaching.
Why? Both coaching and negotiation are basically conversations between human beings. The same 'magic' communication skills work well, whether between coach and client, salesman and shopper, parent and teenager, or negotiator and terrorist. In fact, these conversations are really not all that different from each other.
I discovered this yesterday while reading Wired magazine collumnist, Eric Barker's interview with former top FBI hostage negotiator, Chris Voss, who now teaches business negotiation at places like Harvard. In it, Chris shares tips and secrets on how to negotiate successfully, stop thinking like a schizophrenic, and why you should never settle for a one-boob breast augmentation.
Here are six ways Hostage Negotiation is like Life Coaching:
Obviously, there are key distinctions between life coaching and hostage negotiation. For starters, a negotiator has an agenda to resolve a horrible situation without anyone getting hurt or killed. In coaching, our only agenda is to help the client think and act more resourcefully so they can get what they really want. The negotiator may only be trying to buy time until the SWAT team can either rescue the hostages or arrest the terrorist. Big difference.
But people are people. They want you to hear what matters to them, even if they can't articulate that, yet. Maybe if more people were coached, fewer people would go ballistic.
Learn how to coach people on what really matters to them (and get a coaching certificate):