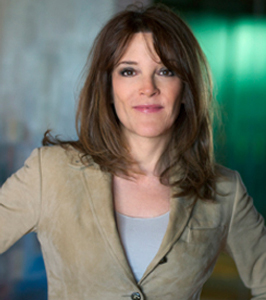 Saturday, I attended an all-day seminar with Marianne Williamson, the best-selling author, speaker and spiritual teacher who popularized the profoundly mysterious Course in Miracles that thousands of spiritual seekers have studied.

The Midwestern New Age community was out in force for the event (Conversations overheard in the ladies room could have come straight out of Shit Life Coaches Say.)

Life coaches can be pretty New Age-y, especially when they are new. But what I like about Marianne is that she's the real deal. Instead of dressing in flowing tie-dye and spouting the latest spiritual-sounding gobbledygook (I'm totally downloading!) She's dressed in a simple pantsuit and not afraid to use some hard language.

Those who are truly evolved tend to be more  bracing than comforting. They aren't particularly warm and fuzzy. Marianne's a great example. She ended her 8-hour seminar with, 'God bless you. Now go kick some ass!'

High points of the event:

By the way, I lunched with veteran coaches, Joanne Waldman, Kristi Arndt, and  Lynne Klippel. None spoke a single New Age syllable.