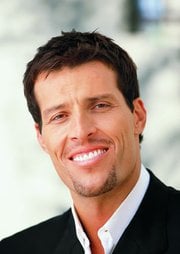 The other day I had a conversation with one of my coaching students about why Anthony Robbins wouldn't pass IAC life coach certification.

On further reflection I realized that he wouldn't pass ICF coach credentialing, either. Why is that? Because he engages in some huge life coaching no-no's. I'll explain in a moment...

Maybe it isn't fair to measure what Tony Robbins does by standardized life-coaching models. After all, he calls himself a 'Strategic Interventionist', not a life coach.

Then again, he does have a coaching page on his website that claims he is the "Father of the Coaching Industry". Hmm, that flies in the face of what tens of thousands of coaches say, that Thomas Leonard is the 'Founder of Professional Coaching'.

For instance, Thomas Leonard founded both the ICF and the IAC. But...

And I'm just guessing here, but this is a really big "BUT": There are quite a few overlaps between Thomas Leonard's approach to coaching (I studied at both his schools, where I received several coach certifications and I was Lead Certifier for the Thomas Leonard Coaching School) and Tony Robbins' approach, which I've studied informally.

I'm a huge Thomas Leonard fan, BUT...it times out that Leonard may have stolen (ahem, borrowed) many of his ideas from Robbins. I'm just speculating, but Tony Robbins' most popular book, Awaken the Giant Within, in which Robbins calls himself a coach, was based on his work with thousands of people over twenty years and was published in 1991. Thomas Leonard founded his first coaching school (the first life coaching school in the world), Coach University, in 1992, with an awful lot of the very same ideas (though there are some key differences).

Not that I think Tony Robbins invented all of his own ideas. Like many entrepreneurs, he seems to have repackaged, renamed and reorganized ideas that were already out there; some new; some ancient.

A few folks trace these ideas back to Jim Rohn, EST, or Landmark. Others trace their early development to the 19th Century American Transcendentalists. But you can find their roots in the words of Jesus Christ and the Buddha, and in even earlier writings and oral traditions from around the world. (This is one of the many reasons why a degree in psychology or social work, even a PhD, won't make you a life coach.)

But back to Tony Robbins and why he can't pass life coach certification...

REASON #1: Robbins often coaches people who are suicidal. One of the biggest no-no's in coaching is that coaches don't coach people who are mentally ill. And suicidal thoughts are a symptom of some mental illnesses.

Both the IAC and ICF warn against using coaching as a therapeutic tool. The main reason for this rule is that an unskilled coach could actually harm the client. An additional reason is that the coach may expose him/herself to a lawsuit for practicing psychotherapy without a license.

I would not encourage a coach to coach anyone who is in tremendous psychic pain, but I personally have coached clients who had some big issues. In many cases I required them to see a therapist while they worked with me. But they often told me that coaching helped them more than therapy. For some clients, those who are willing to take responsibility for their issues, the tools of coaching are far more empowering than psychotherapy.

Robbins claims he's never lost anyone. If that's true then maybe his strategic interventions aren't as foolhardy as they would be for some coaches. And maybe he's actually saved thousands of lives. In that case, what he does is courageous and extremely valuable.

I've seen him coach people when he did almost all of the talking. And it appears to work. Why? He reads body language extraordinarily well and he has a keen understanding of human nature. Isn't that true of other coaches, as well? I think it is, but Robbins has decades more experience than most coaches and he's worked with thousands of people. Most coaches can't scratch the surface of what Robbins has already accomplished and their skill levels reflect that.

REASON #3: Robbins makes rude jokes about his clients, often when they are deeply suffering. As one of my colleagues said, 'I just thought he did that because he was an a**hole!' Apparently he does it because it jolts the client out of a stuck brain state just long enough for him to shift them into a more empowering thought pattern. And it seems to work!

The IAC and ICF both recognize that shifting the client's thinking is an important part of good coaching, but using a sledge hammer to do it? That's a great way to lose the client's trust. In most cases, it's better to respect and empathize with the client, especially when they're struggling. Then again, if you have only a short time to coach someone who is in deep trouble, maybe the gloves need to come off...

REASON #4: Robbins doesn't have any coach-specific training. Actually, this is only a problem for the ICF. The IAC recognizes that there are good coaches who, like Robbins, have thousands of hours of experience and have been learning for decades everything they can about how to facilitate enormous personal growth and development in others, but who may not have attended an ICF-approved coach training program.

The ICF on the other hand, recognizes that quality coach training speeds up the coach's development, so s/he can coach competently within a year or so, instead of within ten years, which is what it often takes, for the self-taught. The ICF believes so strongly in coach-specific training that they recently announced that they won't even accept untrained coaches for membership in their organization.

Robbins started his journey as a coach while he was still in high school - long before coach training existed. He not only coached his classmates, he claims he read 750 books and attended every seminar on personal growth that he could afford (sometimes attending the best ones several times, so he could master the material). Then he went on to coach thousands of people for decades.

Tony Robbins exemplifies what Malcolm Gladwell says in his book, Outliers: That extreme mastery is the result of about 10,000 hours of experience, rather than the result of extreme talent. Talent is nice, but an obsessive commitment to 'take massive action', as Robbins would say, matters more.

He is famous and his results speak for themselves. He gets away with an awful lot, because his clients already know his reputation and trust him, immensely.

So does life coach certification even matter, when it doesn't recognize the skills that such a well-known master coach uses so successfully? It does, but maybe not for the reasons you would think...

Both IAC and ICF certification processes are more rigorous to achieve than most coaches realize. They virtually force coaches to get thousands of hours of coach training and practice in order to pass. They won't turn you into Tony Robbins, but they will make you a much better coach.

Think of life coach certification as a supportive structure that helps you become the kind of professional coach you'd want to work with.

But take everything certifiers say about coaching with a touch of humor. Because both of these highly-respected certifying organizations miss a wide range of possible master coaching techniques, regardless of what they say about inter-rater reliability. That just means the certifiers agree with each other; it doesn't mean that their criteria include every form of master coaching.

If they fail you, remember, they'd fail Tony, too.

Don't use either passing or failing life coach certification as an excuse to quit your coaching development. Use it as a challenge to keep going and become the kind of coach who can turn around a client's life in minutes.

By the way, Tony Robbins probably is the Father of the Coaching Industry. But Thomas Leonard is the coach who began turning coaching into a profession. Both have made enormously important contributions.

I'd certify Anthony Robbins. [UPDATE: 5-24-19] I would NOT Certify Tony Robbins.

Reason? As I wrote in this blog post, Robbins has made multiple duplicitous and self-serving comments criticizing women who complain about sexual harassment, abuse, and assault without disclosing that he has been accused of such crimes by multiple women, himself. Whether he is guilty as his accusers say, or not, his public comments, lack of disclosure, and disrespect towards women who have been traumatized violates the ethical guidelines of this school, the ICF, IAC, and CCE.

I've definitely learned some new things from him. And I've seen evidence that what he does is highly effective. I've even learned how to use techniques that Thomas Leonard cautioned against.

What do you think? Do you agree that Tony Robbins wouldn't pass ICF or IAC life coach certification? Or am I totally full of cr*p?

Want to learn more about becoming a coach?