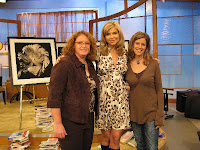 I heard from a number of coaches after they viewed thePenn & Teller Life Coaching videos below, who reported feeling mildly traumatized ("skeeved" is probably a better word) by how crummy the featured coaches appeared.

I think after all the "How Not to Coach" videos that I've run in the Mastery Coach Exchange, it's time I showed you one that displays true masterful coaching and how it changes lives, both in an instant and for all time.

Here's the perfect video to show that. It's a recent segment of the KHOU Great Day Houston show featuring virtuoso professional coach, Mattison Grey, IAC-CC (member of SCM's Board of Advisors). We briefly meet a couple of Mattison's clients, including the one who ditched her successful IT exec job to do what she really wants: own and run a gorgeous resort in Bali.

Then we watch a mini-session (4 minutes!) where Mattison coaches a member of the audience and helps her find what she really wants to do with the rest of her life. Mattison nails it with lightening speed. See if you can catch what she does (If you're a member of SCM, I bet you notice it). It goes by so fast, you may have to watch twice. There are instructions at the end of the video on how to get a work sheet that will help you find what you really want, too.

Also notice people's reactions when Mattison says "pros & cons" don't work and later points out that high performers are really good at getting what they don't want ~ Do you think she's speaking the truth for anyone?

Not too long ago, I had a conversation with Mattison in which we both agreed (half joking) that all those untrained, uncertified coaches out there who think they're so great ought to have to prove it by becoming IAC Certified! (Oops! There, I said it in public!) That may never happen, but it would sure prevent any more Penn & Tellers.

And ~ I have a request. If you like the way this video displays coaching; if you think it casts a favorable light on the coaching industry; please email Mattison here and beg her to have one of her tech people post this video on YouTube for the whole world to see. Mattison tends to ignore me when I suggest ways to leverage technology for more fame, but I bet if enough of you asked her to: Please, do coaches, coaching, and the whole world a big favor and show them what great coaching really looks like, then we'd all feel much better about those silly videos that show bad coaching - and Mattison will be world famous! (Hmm, maybe then I'll pull a Stephen Colbert and claim I gave her the "Stewart Bump"!)