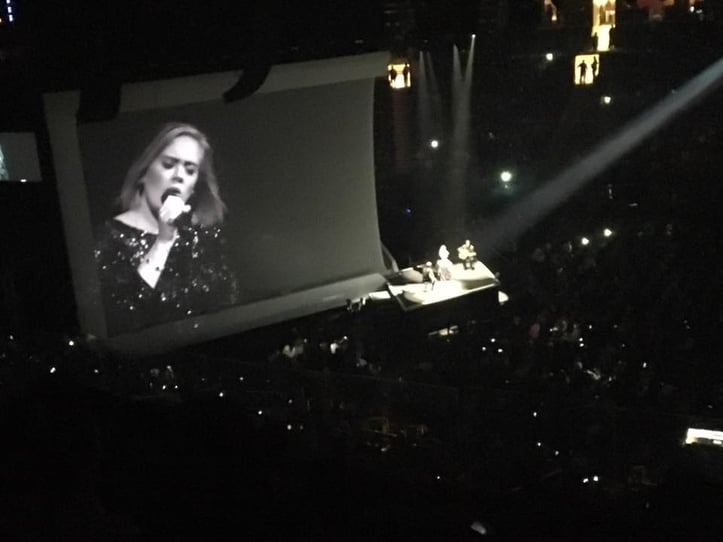 One week ago, today, School of Coaching Mastery quietly closed its doors for a much-anticipated event: Adele's last show at Madison Square Garden in New York City. My daughter and Office Manager, Jessie Stewart, and I had scored tickets last November for the sold-out show and traveled together to our former hometown for a little R&R and to see our favorite singer.

Adele did not disappoint!

As I made my way home from NYC I reflected on my takeaways from the event. Delightfully, there were many.

1. Be yourself. Adele models this better than anyone. She spent two hours alone onstage in front of over 18,000 people. No warm-up band, no spectacular floor show, no dancing, no pyrotechnics, just one woman in a modest dress and THAT VOICE. Her songs sounded just as sublime as all her records and between them, she told hysterical stories. As Jessie's friend, Meg, said after the show, Adele probably could have a career in stand-up comedy. She is enough as she is. So are you.

2. Hold out for what you really want when it matters, but settle for good enough when it doesn't. Researchers say that people who always want the best are less happy than people who settle for good enough. This probably is true most of the time, but in my experience, holding out for what you really want when it matters is key. Adele was what I really wanted. A fancy hotel room at inflated NYC prices? Not so much. As my mom always said, nobody stays in their room, anyway. So we found a hotel several blocks from MSG with fewer stars and better reviews, were perfectly happy with it, and spent the extra money on heavenly meals.

3. Take happiness breaks. I rarely take days off from work, except when I'm enrolled in a course. But if you want to do your best work, get out of the office occasionally and do something special. We went to NYC at the perfect time. The temperature was ideal, humidity low, no clouds. Our first day, we walked over six miles just enjoying the West Village, SOHO, NOHO, etc. The second day, we went to the Metropolitan Museum of Art. By then, we were walked out and took a cab all the way back to the hotel, exhausted but happy.

4. Step out of your comfort zone. As awesome as Adele's show was, one of the most unique few minutes came before we even entered MSG. One member of our party couldn't make it, which left us with an extra ticket for a show that had been sold out for months. I didn't know whether to give it away or sell it, but I knew if I sold it, I wanted to get at least as much as I paid, which was a bit over $100. As we approached the Garden, I heard a scalper yell, "Does anyone have tickets to sell?" I held up one finger and said, "I have one!" Next I knew, we were huddled on a dark corner. First we had to let him inspect the ticket for authenticity. That took some trust, because he could have snatched it and run off. He offered $60. I countered with $150. Then he came up to $100. I said I paid more than that. He offered $120 and let me feel his cash to be sure it wasn't counterfeit. That took trust on his side. I said, "Sold." We went into the Garden $120 richer, and me feeling a bit pleased to have just done something a bit risky that I'd never done before and I even got the scalper to come up twice as much as I came down. I spent all of the money on T-shirts and beer, just in case it really was counterfeit. By the way, Thomas Leonard's 28 Principles of Attraction includes the advice to be a little bad sometimes, because it gets us out of our safety zones and stops us from feeling superior to others.

5. Appreciate what you have. It was so much fun being back in NYC that I fantasized a bit about moving back, but my last morning was cloudy and rainy, which always makes the city look ten times as dirty, and I remembered an old rule of thumb: that when everything goes right, great weather, great food, cabs are easy to get, the scalper buys your ticket, etc.; NYC is the BEST place in the world, but when it doesn't go well, weather is dreadful, passing buses drench you, there are no cabs anywhere, somebody steals your wallet, etc.; NYC is the worst. I was ready to go home, enjoy the quieter, slower pace, and get back to work doing that I love. How fortunate I am to have found my calling and to be able to afford to play hooky once in a while.

So those are my chief takeaways from my quick trip to see Adele.

By the way, we have another Adele at School of Coaching Mastery, who is also delightful, and she's hosting our Positive Psychology Coaching Study Group, starting this Thursday. It's a perfect way to learn more about positive psychology coaching and it's free to everyone. If you'd like to join, click below.