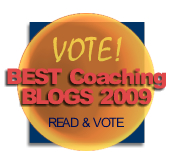 Last week I wrote about how competitive the Best  Coaching Blogs 2009 contest had become.

Thousands of votes; lots of excitement. Well, we seem to have turned a corner with that. One blog recently got more votes in a period of a few hours than the number of visitors to our entire website! Hmm...if each person is supposed to vote once, then...

Today, I also received an email from someone who says she's been bombarded by bloggers who are asking her to vote multiple times for their blogs. Not cool. Not cool at all.

The voting software is designed to prevent anyone from voting more than once, but any system can be "gamed". How naive I must be to think that coaches would be above all that!

When I first caught wind of some cut-throat activity, I started watching my web analytics for irregularities and they revealed mostly positive behavior, plus some that I wasn't so sure about. I made some mental notes about how to change the contest for next year, but it meant that possibly I had missed some activities that should have disqualified a few blogs this year and it was too late to be sure. That's not good.

Now I'm thinking that I can't guarantee the fairness of this contest. That makes me really sad, but I'm not one to stand around sniffling.

Clearly, some changes need to be made. And although I was hoping for a "People's Choice" award for coaching blogs, I think it would be much fairer to let all of the bloggers vote for each other, including those who didn't make the previous two cuts. The web "votes" will now be for "entertainment" purposes,only.

I'm asking myself what I've learned here. Should I have tested the software with a mock contest? I don't think a mock contest would have elicited this result. Maybe experience really is the best teacher.

Perhaps the real lesson is that temptation can get the better of even good people, so it's best not to tempt them. Or judge them.

My hero in all of this, though, is the coach who disqualified herself and withdrew from the contest. She said it was the negative vote option that was her downfall. She did the right stuff to bring people to the site to vote for her, but others kept voting her back down, so she started adding the votes back in. As she said,

'I know the playground excuse of “She started it!” won’t fly and I won’t even try to go there.'
Kudos. I was going to invite other bloggers to step forward and disqualify themselves, if needed, but since the contest rules are now changed, there is no need, except maybe for your own integrity. Let's all take a moment to shake off that bad ju-ju and step back into our best Selves.
Last points: The contest has succeeded in its main objective, which is to spotlight the best blogs by coaches and encourage more people to read them.  And the remaining bloggers didn't necessarily do anything wrong.  Most of them got to the semi-finals by writing great blog posts and inspiring their readers.
Expect more announcements about the contest in this space.
I'm really curious about your thoughts. Did you vote? What was your experience? Were you concerned about fairness? If you're one of the bloggers, what are your thoughts?