Are You Stuck in the Green Meme? 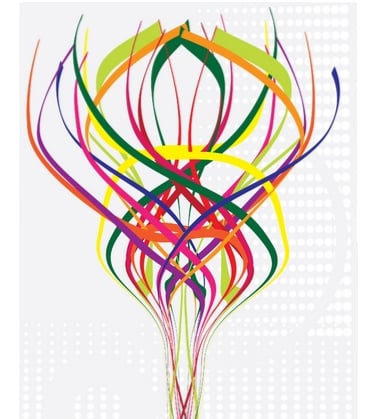 I've been fascinated by Spiral Dynamics, lately. It's a theory of human development that helps to explain people's paradigms, both individually and culturally. (You can read a brief synopsis of it in Ken Wilber's A Theory of Everything, or the whole enchilada in Spiral Dynamics by Don Edward Beck and Christopher C. Cowan.)

This theory neatly explains why people think what they do and why there is so much disagreement about values in today's world - and it's weirdly color coded.

Spiral Dynamics & Ken Wilber use the word, "meme", differently than we do as coaches. In SD, the word, "meme", closely resembles the word, "paradigm". It's a come-from more than an idea. Another term for this is, "meme complex" or value system.

So, SD organizes paradigms, or memes, into levels that are color coded. The dominant memes of Western Society are the Red Meme, which is war-like and features a "might makes right" ethic; the Blue Meme, which is based on absolute truths and is dominant in our major religions; the Orange meme, which is evidence- and material-based and is seen in science and corporate ethics; and the Green Meme, which is socially conscious, multi-cultural, and teaches that truths are relative and dominates in the social sciences and academia. SD arranges these memes in ascending order, with Red on the bottom and Green on top. There are other memes, as well, but these are currently the dominant ones.

One thing that all the above memes have in common, is that they tend to view each other as wrong. The reality is that individuals and cultures all need to pass through every stage in order to progress. But because they see each other as wrong, the world is suffering from a kind of global auto-immune meme disease.

Here's an example of that: in the US, we're currently divided between the "red" conservatives and the "blue" liberals. Those colors have nothing to do with Spiral Dynamics, but conservatives are basically of the Red warlike and Blue religious memes. Whereas liberals are of the Orange scientific and Green socially conscious memes. And each side thinks the other is nuts.

Ken Wilber says Cultural Creatives are primarily of the Green Meme and also that this meme rose to ascendancy with the Baby Boomer generation. I'm thinking that the Green Meme is pretty common amongst coaches. Do you agree?
Here's the hitch: There are levels above the Green Meme. In fact, there's a whole Second Tier of memes in SD that begins with the level above Green. And between Green and the next one up, the Yellow Meme, which is about "Flex & Flow", there is a huge leap in consciousness. This leap goes from thinking that everyone who doesn't subscribe your meme is wrong, to thinking that all the memes have value and must exist. In other words, it's all perfect.

I believe coaching, itself, belongs in the second tier. That you might see the value of coaching if you're in the Green Meme, but you won't really get it, until you're in the Yellow Meme. This may explain, at least in part, why there are frustrated coaches out there, because only a tiny fraction of society has reached the Second Tier. (They have research to back this up.)


[UPDATE 5-9-13: In a live teleclass, yesterday, Ken Wilber mentioned that research shows that 5% of the world's population has reached the 2nd Tier and that if current growth continues, it will be 10% within 10 years. Historically, when a new meme system takes hold in 10% of the population, a tipping point is reached, which results in immense cultural change. This may be good news, since today's global problems require an unprecedented degree of cooperation from the global population.]

[UPDATE 9-12-2016: In a private conversation, Paul Ray, the sociologist who conducted the original research that was shared in his popular book, Cultural Creatives, told me Ken Wilber was wrong about SD and Cultural Creatives. He said Cultural Creatives fit more fully with the so-called, 2nd Tier Turquoise Meme, which is often confused with Green. People thinking at Green are much more political and often become activists. Turquoise is more spiritual and has a deep connection and sense of Oneness with Earth. Instead of marching, they are more likely to be redesigning culture and redefining what it means to be human. Both levels are highly concerned about Climate Change, but respond differently to it.]

The problem with a coach who thinks on the level of the Green Meme is that they are not going to understand some important ideas at the heart level and that can get in the way of their success. They may get it cognitively, but not at the all-important Being level.

So, how do you know if you're stuck in the Green Meme? Well, I haven't done research on this, yet, but here are some possibilities:

How do you make the shift to Second Tier thinking? Ah, that's where coaches come in! That's what many of us are in the business of: Helping people shift up to the Second Tier!

My prediction is that Green Meme coaches will have more difficulties with their career than will coaches thinking at the Yellow or Turquoise Memes. And it's a BIG shift. No wonder becoming a coach is such a huge transition!