What is Positive Psychology Coaching Anyway? 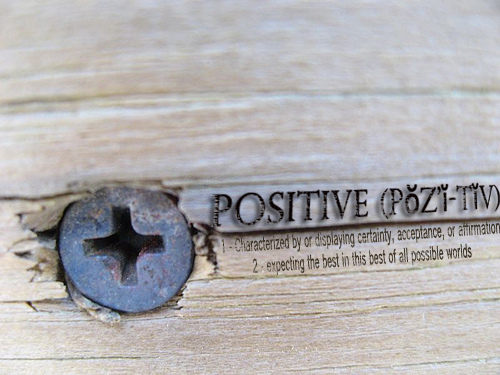 You might wonder what the heck Positive Psychology Coaching is, especially now that positive thinking, the Law of Attraction and all things associated with The Secret seem soooo out of vogue.

What, you haven't noticed that positive thinking is on the outs? You haven't heard Law of Attraction practitioners refered to as 'Thought Police Nazis?' Oh you will. It's just that mostly it's leading-edge folks who are speaking up. Next year, it'll be everybody. The pendulum has started its return swing...

Just this week, one my favorite coaches, Mattison Grey, ranted on the problem of positive thinking. And one of my favorite coaching bloggers, Tim Bronson, wrote that gratitude sucks (By the way, Tim, when are you going to enter your blog in Best Coaching Blogs?) And the only Shrink for Entrepreneurs I've ever heard of, Peter Shallard, announced that optimism is ruining your business.

Is this just a crowd of Negative Nancy's who aren't enlightened enough to get how great it is to be positive? Nope. These are people who are perceptive enough to see both the truths and the untruths hiding behind the hype.

So emboldened am I in their company that I will say bluntly what I've thought for years: If you throw out all your Abraham books and stop watching Wayne Dyer specials on PBS you'll probably become a better coach.

Why? Because coaching is not about magical thinking. It's about stuff that actually works. And while you and your clients are busy trying to control all your thoughts and never be judgmental, life is passing you by, including all the tidbits that will help you get what you want. And because over-focusing on anything creates shadows that can run amok.

"No one should spend their time trying to think positive thoughts. We've all got better things to do." - Thomas Leonard

So should you embrace negativity instead? No. Relentlessly negative thinking leads to depression, anxiety and more problems and positivity does a fabulous job of canceling all that out - up to a point.

So what is Positive Psychology Coaching and how does it fit in here?

Positive Psychology takes the positive vs. negative question out of the realm of beliefs and opinions and actually identifies when, what types, how often and even why positivity helps people succeed, flourish and gain mastery; and even when, what types, how often and why negativity is helpful when we want to succeed, flourish, gain mastery and be happier.

The Positivity Ratio has been thoroughly researched. It basically says that in order to flourish, you need, on a regular basis, to think and feel positively at least three times as much as you think/feel negatively. So the right ratio of positivity leads to flourishing.

And there's an upper end to this. Too much positivity vs. negativity actually causes problems. Think of it as a Positivity Bubble, which is where many Law of Attraction practitioners live. I think that's what the contrarian writers above were all trying to say: 'Don't over do positive thinking, because complacency can hurt you.'

It gets even more interesting...

Contrary to popular belief, you don't necessarily have to reduce negative thoughts and feelings in order to flourish and not all negativity is toxic. Some of it is quite valuable. Positive Psychology has identified which is which and provides assessments and tools to identify what's needed: more/different positivity and/or less/different negativity?

That's where Positive Psychology Coaching comes in. When you've got the right tools, including the assessments you need and the ability to analyze them and provide questions and exercises to shift your clients' ratios, you can assist your clients to experience more happiness, wellbeing, and mastery. In other words they flourish.

But Positive Psychology Coaches focus on much more than just positivity. They also focus on Values, Strengths, resiliency and resourcefulness, again with a precision that pinpoints what's needed and applies it more quickly and accurately than can most other coaches, creating better results for their clients, more quickly.

That's what your clients want.

You'll learn just enough about the scientific underpinnings of evidence-based coaching, get introduced to a wealth of supportive resources, including assessments for you and your clients, learn Positive Psychology interventions suitable for coaching, get a chance to practice in class and even take an online test and receive a Positive Psychology Certificate from School of Coaching Mastery. You may even be able to apply what you learn to get certified by the International Association of Positive Psychology Coaches (IAPPC).

So don't throw out positive thinking just yet. Instead, learn to apply it with laser precision and get greater results.

Got an opinion about positive thinking? Please share it in the comments section, below.

Image by LiteWriting aka Loreen72